From 1811 he was an apprentice to Jan-Baptist de Keyser (°1751), living and working at the Pelgrimstraat in Antwerp. From 1822 onwards he was an independent entrepreneur.

In 1826 the jeweller’s showroom and workshop moved to Rue des Emaux 1, close to the Grote Markt in the center of Antwerp. Until around 1860 Jean-Michel Anthony worked in this shop named ‘in den Pelgrim’ where he was succeeded by his son Jean Baptiste Anthony (Jean fils). The terra cotta bust of the pilgrim, which used to decorate the shop’s gable was preserved, as well as the figure of a pilgrim which appears in Anthony’s hallmark.

Around 1889 Emile Anthony (1856-1936) took over the family business. Patents from 1885 prove he joined his father a few years earlier. According to the inscription on his shop window, which was at Oudaan 20 by then, Emile Anthony worked as a silversmith, jeweller and antique dealer.

His brother Jean-Michel Anthony became a well known painter, but as few preserved jewellery designs show us that Emile was a gifted artist as well.

1889 Secretary of the jury in the jewellery section Antwerp World Exhibition.

1894 Member of the jury in the jewellery section Antwerp World Exhibition.

Emile Anthony was fascinated by enamel, a decorating technique based on melted glass. In 1885 he applied for a patent for a technique he had developed. In the “Bijoux Anthony brevetés” colourfull enamels were surrounded by diamonds. 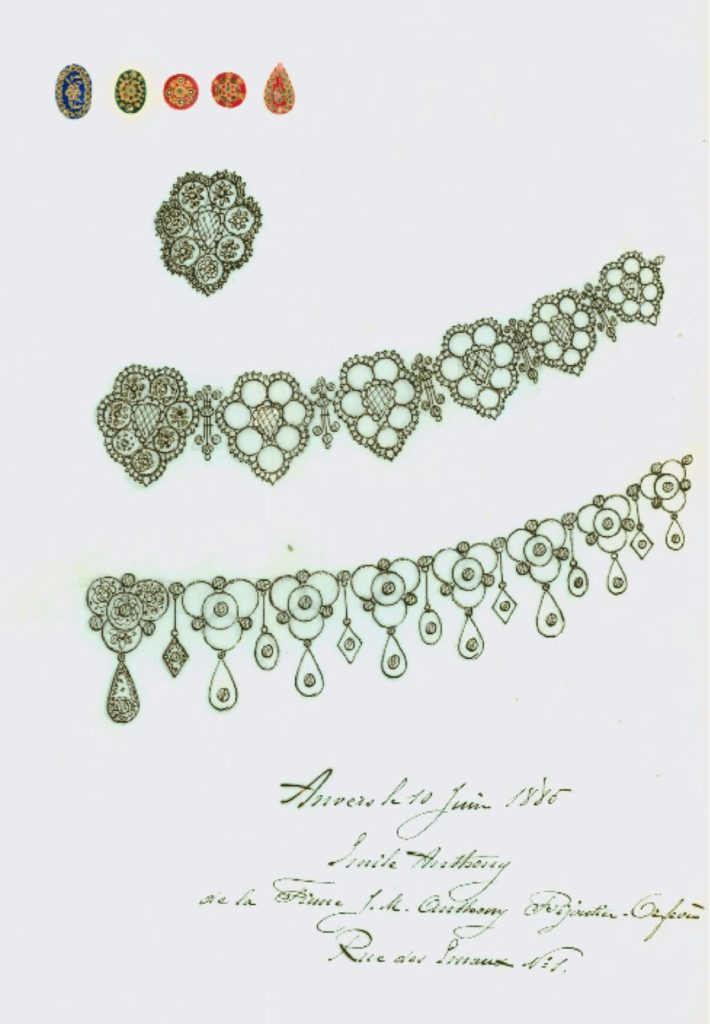 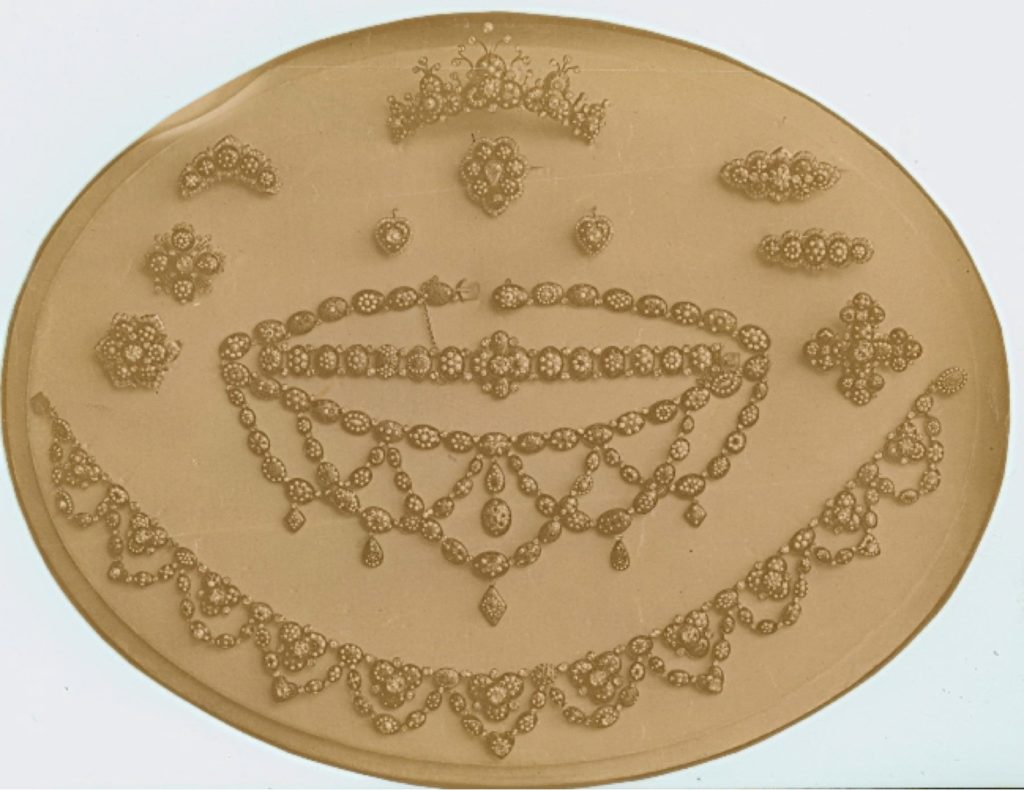 Within the renowned family business “Wolfers”, a new generation worked together in a well planned company structure. The four directors -the three brothers Philippe, Max, Robert and cousin Albert Wolfers, who was married to their sister- were all running their specialized departments.

Wolfers Frères mainly produced a commercial line, which also sold well internationally, such as silverware in Neo-Rococo and other eclectic styles.

Next to his position as artistic director of the company Philippe Wolfers (1858-1929) also worked as an independent artist.

He designed exceptional jewellery in the innovative art nouveau style, as well as furniture, functional and decorative objects in silver, bronze, ivory and other materials.

Due to the support of the family business, Philippe Wolfers was free to develop artistically while enhancing the Wolfers enterprise.

At the International Exhibition of Brussels in 1897, artworks of Philippe Wolfers were shown together with his creations for the Wolfers Frères company in a strikingly stylish stand, also designed by Philippe.

This partnership lasted longer than all the other national, as well as international, partnerships entered into by Wolfers. 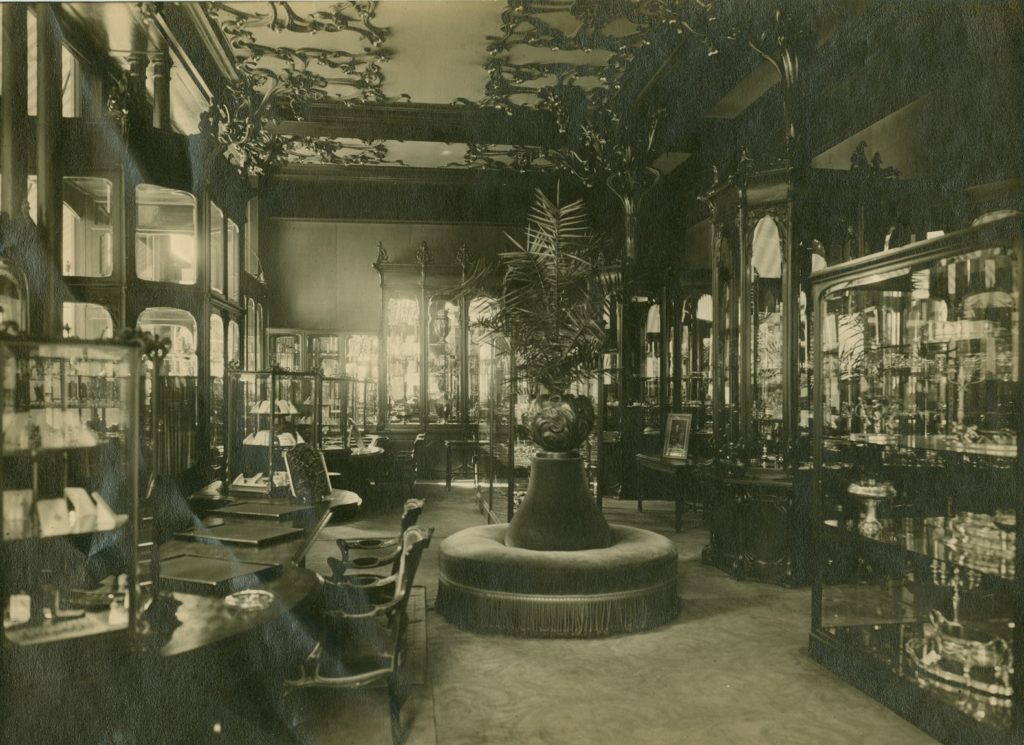 The jeweller’s shop moved from Oudaan 20 to Meir 25 in Antwerp. To furnish this new showroom many of the art nouveau pieces designed by Philippe Wolfers for the stand at the International Exhibition of Brussels 1897 were reused.

The jewellery designs which have been preserved show that ‘Emile Anthony & Wolfers frères’ created jewellery in distinct art nouveau and art deco styles.

The works of art designed by Philippe Wolfers evolved to pure Art Deco. The Gioconda ensemble, shown at the World Fair of 1925 in Paris, crowned his life work.

The partnership between Anthony and the Wolfers firm ended in 1952. The name of the company changed to Maison Anthony.

After the shop area at Meir had been halved, part of the art nouveau interior was sold, and ended up in the Hessisches Landesmuseum in Darmstadt through the Karel Citroen collection.

After the death of Paul Anthony in 1957, a large part of the shop’s furniture and archives moved to Mechelsesteenweg 14 in 1960.

The history of the Antwerp company Massaux began in Otto Veniusstraat 15, where C.E. Morrens had run a jeweller’s shop since 1879. Maurice Massaux purchased it and changed the name to Massaux.

His successor Charles Habib moved the company Massaux to Mechelsesteenweg 14, located opposite the Antwerp branch of the Belgian National Bank. In 1929 the building was extended to include space for workshops for the successful production of jewellery for the Middle East, The Anthony archives comprise, among other things sketch books and books of photographs of art deco jewellery.

Charles Habib, diamond merchant and secretary of the Antwerp Diamond Club, gave Edmond Rochtus the opportunity to bring together the Massaux and Anthony companies at this address, thus establishing ANTHONY. 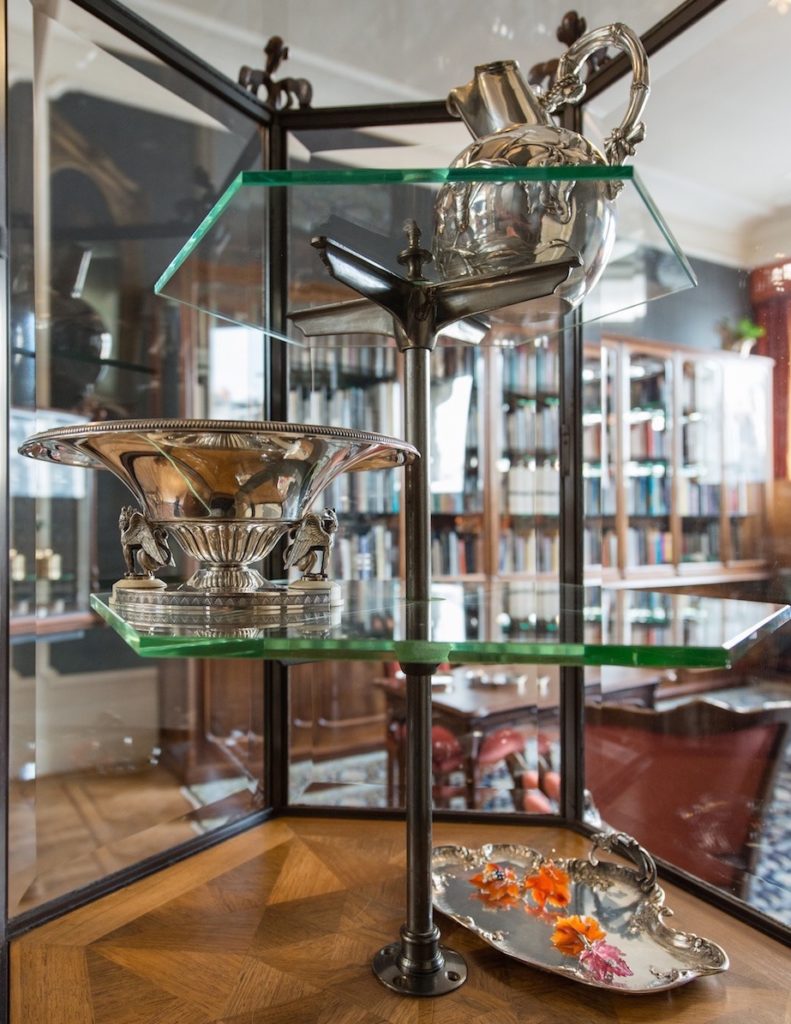 Anthony is located at Mechelsesteenweg 14 and preserves the archives of its illustrious predecessors.

Edmond Rochtus (1927-2011) worked as a goldsmith in the Brussels workshop of Wolfers Frères from 1952 to 1955. From 1955 he worked for Anthony, which he managed from 1960 to 1963 when it became his. Worth noting is that he produced the jewellery designed by Remy Cornelissen and Marcel Mazy. In 1979 he received the first prize from De Beers in the category “men’s jewelry”. In 2001 the production of modern jewellery came to an end.

With its art nouveau interior and rich jewellery archives, Anthony offers the ideal entourage for buying and selling antique jewellery and silver.

If you wish to buy or sell authentic antique jewellery or silver, you can contact Anthony’s current owners Herman and Maximilian Bauer for an appointment.

Upon request, we are delighted to open our historical site for small groups.